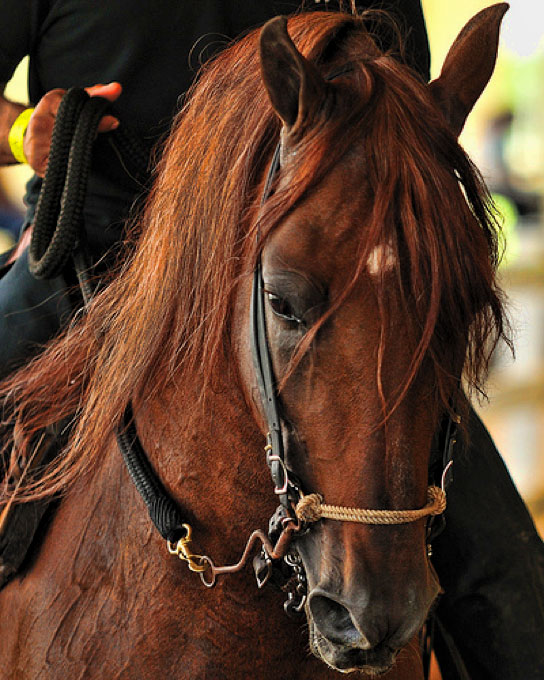 These included Andalusians, Spanish Barbs, and the now extinct Spanish Jennet. These horses were bred for their stamina, sure footedness, with some showing an especially smooth and comfortable gait. Horses with that special smooth gait, stemming mainly from the Spanish Jennet, provided extra comfort for their riders during their long journeys of conquest and were prized above all others. These animals were selectively bred to preserve that prized gait. Along with their other attributes of beauty and extreme intelligence and sensitivity to humans, these horses were called the “Caballo Criollo”.

Variations of this “Caballo Criollo” flourished, initially in Puerto Rico and Colombia, and later in many other Latin American countries. Centuries of careful selective breeding have produced the equine jewel we know today as the Paso Fino Horse.

The Paso Fino is born with this much-prized 4-beat gait, unique to this breed. The cause of its smoothness is that each foot hits the ground separately. The “jar” from the horse’s weight is equally distributed as the hooves hit the ground one by one. The joints, tendons and ligaments of the Paso Fino act as equine “shock absorbers.” The effect is like riding on a cloud with none of the bounce attributed to horseback riding. But, the smoothness of the ride belies the true power of the Paso Fino. Although generally small in size, pound for pound and inch for inch a Paso can out-carry and outlast their less comfortable and bouncy cousins with their trot. Paso horses do anything and everything, from competitive trail riding through the mountains, jumping, reining, cutting, to the ultimate equine athletic feat: the Classic Fino. Their willing attitude reflects their intelligence; Paso Fino connoisseurs call this intelligence “Brio”. It is this Brio that makes this animal uniquely attuned to his rider’s desires and ensures his willingness to please and perform. Brio bestows an attitude that allows this horse to execute his unique gait with style and pride! The Paso Fino is a graceful, agile and supple equine athlete that uses all four legs with precision and harmony for the pleasure of his rider. Think of the Paso Fino as a smooth, well tuned Ferrari, with powerful pistons in their 4 legs.

Awareness of the Paso Fino as we know it today didn’t spread outside Latin America until after WWII, when American servicemen came into contact with the stunning Paso Fino horse while stationed in Puerto Rico. Americans began importing Paso Finos from Puerto Rico in the mid-1940s. Two decades later, many Paso Fino horses began to be imported from Colombia. Today, the Paso Fino horse is an international treasure that is found in Canada, the United States, Germany, England, New Zealand, Australia, throughout Central and South American and the Caribbean.